Calendar interview from last appeal, Will post new appeal once its been tv.

Seventeen years on son asks: “Who killed my Mum?”

The son of a woman killed 17 years ago today says he will never stop hunting the person who murdered her.…

Twenty-two-year-old Daniel Granger from Sheffield was just five when his mother’s body was found dumped in a stream near their home in Parson Cross.

Twenty-five-year-old year old Patricia Grainger was found stabbed, strangled and sexually assaulted. Daniel runs a website dedicated to finding her killer or killers – he says the whole family needs to know what happened before they can move on. 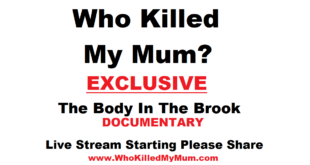 The Body In The Brook Documentary – Who Killed My Mum?

Documentary video(self-made) which was shared live last night: Watch on YouTube. Where i detailed real …